Papa ( left) and his brother Paul.

Papa is turning eighty on July twelve. I feel so proud of him as I write this! He is amazing. And I m not saying that ‘cos he is my dad. He was not always amazing. Funny, often. Also sad, unhappy, in love, loved, bound by duty and the great steel works , surprised ( by the love born from having the children maman wanted), lost, wanted, discarded, using, used, honest, lying, scared, brave, in no particular order. Uh. Like me. Like most of us. All from the same mold, that we must break free of, to become fully fledged loving, fearless Beings.

My sister Veronique came up with a great present idea for papa’ s birthday. He told her once that he never had a teddy bear as a kid. I don’t know why. For Veronique, it spelt the opportunity to right a wrong .  She is quite switched on my beautiful sister. And she knows about kids first hand. She was a special needs teacher for many loving years, she has two gorgeous boys, better known as Juju and Geegee to their doting auntie B…. Yes folks, not having children does not mean you cannot love children. And have nephews and nieces all over the world.

It must be the childlike quality of the childless that attracts them little brats. More on professional aunties in a future post, back to bear-less papa-child.

He was six years old when WW2 started. And boy, did he have fun! What with being sent to a farm somewhere far from home when his dad could not feed the seven fruits of his spouse’s loins..
I have vague memories of his wartime stories, like the time he was almost squashed by a hay cart backing up in a shed, what on earth was he doing at the back of a shed?! Fast forward to 1945: this is the end, mon seul ami, la fin. American soldiers throwing chewing gums to kids, Germans fleeing.  Like this one he still laughs about, furiously pedaling a bicycle to the relative safety of the fatherland, on tyreless wheels.

There was fun everywhere for papa the kid.

That makes me love him even more to know that. A man child in a world of sorrow and fear, plucking wonders in the sparkle of an eye, warmed by laughter about anything and everything. He worked hard at keeping that one going, through the thick and thin of adult life.

My papa is a guru who does not know he is. 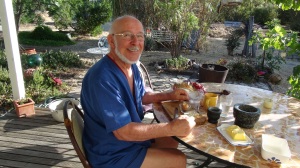 Papa having breakfast in his jammies. Natimuk, summer 2013.

Last time he visited:  antipodean summer, hot, dusty, sitting in the shade house at the back watching the sunset: one of my favourite occupations at the end of the day, shared, or alone.

Shared that time, with papa silent in his director chair, staring at a point somewhere in whoop whoop space.

“Papa, a quoi tu penses? ” Dad, what are you thinking about?

“Moi? Je ne pense a rien! Quand je ne dois pas penser, je ne pense pas! ”  Me? I ‘m not thinking! When I do not need to think, I do not think!
Man oh man. People spend thousands of dollars in exclusive retreats to learn that…. 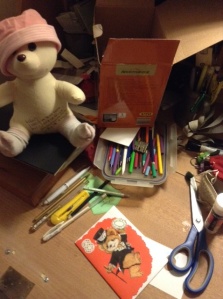 Getting the birthday box ready..

Veronique and I will not be there when papa celebrates his birthday in Belgium. We are filling our birthday boxes, she in the ‘Gong, I in the ‘Muk.

Soon they’ll fly in a big airplane to Belgium, filled with love and thanks. All part and parcel of migrating to the end of the world..

Pap will be back soon. He loves his visits to Australia.

But not quite as much as we love them..