The editing suite.. a very seasonal one! Too hot in summer, too cold in winter 🙂

Last week, I took a leave of absence from the Committee of Management of the adult training organisation I have been involved with since 2010. I have a tendency to give my heart and mind to what I commit to… too time consuming for me to be able to focus on what I love and need to do right now: story telling! For the next few months, it will be just I and Beyond the Smile. YAY!

Binod Paudel, main protagonist in Signature, a film by director Sagar Ugdam. Binod is an agent of change in Nepal, focusing his art on social issues.

I first fell in love with Binod’s eye for exquisite details relevant to the telling of a story in 2008. It was after seeing his short film Awaken Eyes, one of the Nepali entries for the Kathmandu International Mountain Film Festival (KIMFF). (In 2009, Awaken Eyes was selected for the Cannes Film Festival and in 2013 was made into a full feature film, Saanghuro, by Joes Pandey.)

Binod could capture a sound, a close up, a scent of the events , and plunge the viewers in the same room as the film characters. 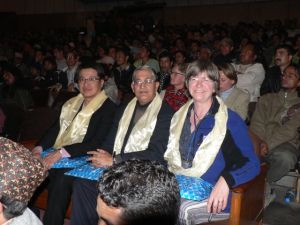 I was at the KIMFF as international judge, along with seasoned Bollywood  and Kollywood directors Yadav Kharel from Nepal and Ugyen Chopel from Sikkim. We had a ball watching squillions of short films, feature films and documentaries, deciding who would win the competition . I had felt strongly about Binod’s short film. After the screening, I went and told him how much I liked it. We have been friends ever since, witnesses of each other’s unfolding history in vignettes shared over coffee on my regular trips to Nepal.

Back to Beyond the Smile. Lots to catch up on. I am doing my trek prep, connecting the participants, and throwing myself into the business of telling stories.

Beyond the Smile.. a glimpse of things to come..

It took a sleepless night, a foggy head and a bath to allow myself to go with the flow, no more digressions, a full immersion in the feelings and memories captured since I started to journal my life experiences on video: that being in the moment, I now look at it from a film maker’s perspective, feeling my way through the sounds, images and words that will make Beyond the Smile a story worth sharing.

Exhaustion opened me to Divine Inspiration.

It was there all along.