Tomorrow I am meeting with someone who is living her dreams, not dreaming her life. Or perhaps she is doing both: dreaming her life, then living it! From New Zealand via Sydney and a successful career as a lawyer, Chris decided to sell up and go and do what she loves most: climb in the high Himalaya and live in Nepal.
I am hoping she’ ll do a little interview with me. We are planning to meet – appropriately- at the Garden of Dreams, at the edge of Thamel. An amazing place, totally out of this world. 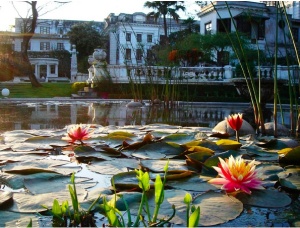 I want to talk to Chris about Ang Kami’s wife and village. Soren, a comrade guide who also worked with Kami, just called, and told me that dear Kami died two months ago. I am sad, and I am full of love. I ve known Ang Kami since I started guiding again, in the mid noughties. The quiet, smiling man getting on in years, yet such a competent climbing guide. Besides working together, we bumped several times into each other over the years at the Naya Bazaar market’s momo shop, giggling and scoffing plates of the meat filled wonders with Lakpa’s daughters slurping them like live oysters.

Ang Kami at our wedding. Photo by Sue Didi McCormick

A beautiful, gentle soul, Ang Kami was. He came to Eric and my wedding in Lura last February, from his village a few hours walk away. He was gaunt, explained he had been in hospital for three months. The next morning, after sharing his home made lip licking good pear rakshi with us all, as you do, he left, smiling. Later that day Lakpa showed me a letter Kami had been too shy to give me. In it he explained that all his savings had gone in hospital fees, his house needed a new roof, and could we please help? Sue Didi and we filled the envelope and gave it back to Lakpa to pass on.

Chris, who also knows, knew him, offered to sponsor his boy to do a climbing course to provide for the family, while I wondered about starting a shop in his house, as there are none in the village, next door to the sprawling and very holy Tubten Choling Monastery.

Tubten Choling Monastery. When we walked through in 2011, I had no idea Ang Kami was living next door.

Come and stay at my place, he said as he left the day after the wedding. It would have been lovely. Now, what matters is to keep living the dream, why should it stop because he moved on? Tomorrow, I’ll talk to Chris about all this, and we’ll dream a little together, and make sure our dream becomes a reality. We are good at that.